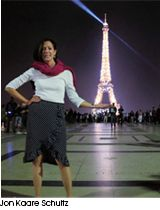 Living in France was a life-long dream, and after traveling to Paris for short stays for holidays and for work, I came to settle here in 1989. My former career in New York was in media and fashion; once in Paris I began studying art and art history. Represented for my portraiture at the former Galerie des Saints-Pères, I also founded a small business, SparkyCardsParis, producing note cards of Paris scenes. In 2004, I created and hosted The Art Beat, covering the Paris cultural scene for the internet radio station Paris Live Radio.

I have been giving tours of Paris, its museums, monuments and neighborhoods since 1997. It is a pleasure to share my love of the art, architecture and history of this beautiful city. I am bi-lingual and a graduate of Columbia University with a degree in French language and literature. My tours are for  visitors of all ages, from all over the world and I also work with various prestigious tour companies.

PocketGuides, the world’s leading audio city guide application, produced the Angels of Paris App in 2013. This fun and interesting tour is written and narrated by Rosemary Flannery. You’ll stroll through the heart of Paris, viewing beautiful and unusual depictions of angels illustrated in architecture by some of France’s greatest sculptors.